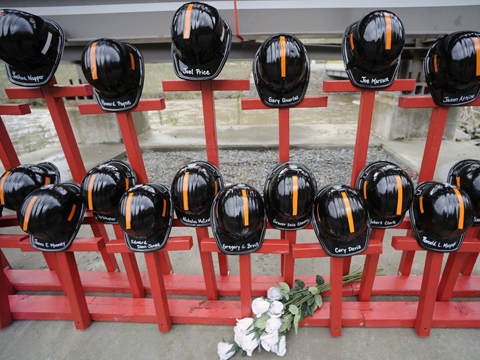 Making UBB Simple for Anyone That Cares

We have now passed one month since I delivered the letter to Senator Manchin and Governor Tomblin asking five basic and simple questions.  The questions in short were:

3.     Do you believe you have a responsibility for miner safety?

4.     Are you aware MSHA is requiring miner dust scrubbers to be turned off?

5.     Are you aware that some new legislation could make miners safer?

Senator Manchin told the media on the day he received the letter that he would respond.  Governor Tomblin has not said anything publicly to my knowledge.

It is both obvious and frightening that these West Virginia politicians see no urgent need to improve mine safety nor to get the truth out there about the UBB explosion.  A truth that is necessary if they are to have any hope of preventing it from ever happening again.

Coal miners deserve an answer as to why their scrubbers are being idled.  They also deserve the enhanced safety and protection that they can receive from what was learned at UBB.

The five questions the letter asks are not difficult questions for the politicians to answer.  It should not take a month to answer these questions.    However, we can hope that their delay in answering is that they are looking into the facts and learning the truth.

Maybe it will help them to reflect on the following as they attempt to answer the questions.  The investigative reports by MSHA, the WV Department of Mines, and Davitt McAteer essentially blame bad upper management, bad mine management, inadequate rock dusting, missing water sprays, missing cutting bits, and float dust for the explosion.

These causes can be placed into two categories. First, badly intentioned management and second, this bad management’s failure to control day-to-day mining challenges.  The problem with this theory is that the upper management team and many of the workers that were meeting the challenges of day to day mining at UBB had both been in place during the mines entire 16 years.

On the other hand, on the day of the explosion (4/5/10) there were two major differences at the mine versus at any time during its prior 16 years.  First (as directed by MSHA) a ventilation plan change was completed the weekend before the explosion that lessened the airflow.  Second, the mine was suddenly inundated with a huge release of natural gas immediately prior to the explosion.

Mining and accident investigations can be complex.  However, blaming such an unusual event as the UBB explosion on a management team and a work force that had been in place for years and on missing water sprays and mining bits is irrational.  The huge natural gas inundation and less air are clearly the things that were different on April 5, 2010 – not the management, not the workforce, not the mines upkeep.

What was different that day at UBB than in prior years?    What was different at the UBB mine that day than at other mines?   The answer – a lot of natural gas.  Natural gas, as determined by chemists and based on the government’s own samples and analysis.  Also different than the prior 16 years was that the mines longwall face had less airflow on the day of the explosion than during its prior years of mining.

In summary, coal mines that get inundated with huge volumes of natural gas are more likely to explode than those that do not.  If mines that have lost cutter bits and water sprays or that don’t have perfect rock dusting often exploded, the industry would have explosions every day.

But mines don’t explode every day.

The UBB mine was in the condition that MSHA’s inspectors had pushed for it to be in.  These inspectors did not anticipate a natural gas inundation.  But rather than be honest after the explosion and attribute the explosion to the obvious causes the politicians and MSHA launched a witch hunt.    They continue to defend their irrational untruth even after four years.